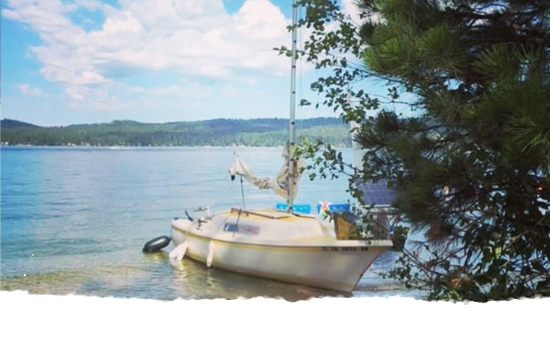 What do you look for when buying a boat? I took to google and read the long list of things to look for when buying a boat. The beginning of the list started off with a strong suggestion to hire a boat surveyor to give the vessel the proper walk through. Since the boat I found on Craigslist was $1,500 I couldn’t justify paying $500-$600 that google said it might cost to have someone look at it. Some of the things I was going to look for included:

I wanted to get a little more information on the boat I found and I had one big question. How easy was it for a sailboat tip over? Again I have never been on a sailboat and my father has a rather large fear of open waters—mainly because of sharks.

The thought of being in the water with sharks does seem scary but after some googling on I found you have a better chance at getting struck by lightning and was good to go. Also, after googling—sharks are most definitely not the only thing to be worried about when sailing offshore.

Back to how easy it was to tip (capsize)—I found out there is a thing called the Capsize Screening Formula that sailboatdata.com provides. For this particular boat that was 2.39. Was this a good or bad number? What I was able to find online was that a number higher than 2.0 was more prone to capsizing when offshore. So with that information and knowing we are only going to be taking this boat on the lakes in Idaho near Boise I was comfortable with it’s Capsize Screening. This formula is much more complicated than stated above and like I said, It greatly depends on what type of sailing you are doing and where. I found a great read for more information here:  oceannavigator.com/assessing-stablity/

I arrived where the boat was stored in Nampa Idaho. The seller was nice, a teacher by profession and had a fascination with the outdoors and adventuring. I asked why he was selling the boat and he said after learning how to sail with this boat he was going to take up kayaking. I love that this was his first boat and that he learned to sail with it.

So with my vast amount of knowledge in surveying (haha) I went around, on and in the boat—tapping and inspecting things I had no clue what they were called or really even what to look for. The boat was a 1972 and definitely looked like hell. For me though, this felt like the boat our family would learn to love, fix and learn how to sail.

I offered the seller $1,250 and the seller accepted the offer. I drove the boat home to surprise the family. Did I mention my wife Tabby had no clue I was looking at and buying a boat? I don’t think I will be doing that again ;).

Putting up the mast on our new/old sailboat

After researching how to put up the mast (we did not do a good job here) we got a sitter for the kids, grabbed my mom and a friend and left for Lucky Peak, the closest water we could launch our new boat into.

We got to the marina and began the prep work, getting the boat ready to put in the water. Once the boat was ready we slipped her into the lake (reservoir). So I had never drove a boat without a steering wheel. At the time I didn’t even know what the stick was that I would be steering with but I was eager to just get out on the water. It’s called a tiller (insert hand slapping face emoji here).

Surprisingly—with just a couple pulls of the starter rope we got the old crummy looking 6hp Evenrude outboard motor started. I untied our dock lines, pushed off and slipped the motor into the forward position. We were off. It didn’t take long to get the hang of steering the boat with the tiller and soon we were in the middle of the lake. We decided, hey, let’s put up the sails! We are a sailboat. We got the sails up, not pointing the boat into the wind with the motor (insert hand slapping face emoji here) but they were up and we were actually moving.

Nope, we did not know what point of sail we were on because we had never heard of that and didn’t know what that meant. But for our first time ever being on a sailboat, raising the sails and actually moving—was a pretty magical feeling.

With the sails up and the winds to our backs, I thought this was a great time to grab a drink from down below. Before stepping into the boat I noticed something was out of place. There was water in the boat! Probably 10 gallons or so if I would have to guess. I told Sean, our friend who had joined us for the day to come take a look with me. The water was not coming in fast, so that felt like a little bit of a relief. Still, there was enough water in the boat that it was concerning.

This boat did not have a bilge pump, so we grabbed our drink cups and started bailing out water before we inspected where the leak was coming from. For a minute I thought, shit, I bought a boat that was going to sink the fist time we put it in the water. But after 10 or so minutes with the cups, the water was mostly gone. We found that the keel bolts were the culprit. It was a very slow drip. We dried it off best we could and threw on some duck tape. This seemed to stop the drips for the time being and the boat was no longer taking on water.

We had a drink and continued to learn the ropes, or lines—sheets? I was pretty confused at the time and couldn’t keep the terminology I read straight.

All in all—I would call our first launch of a sailboat a success.